Breathtaking canyons interspersed with hillsides of homes, Del Mar is two square miles of coastal land best known for its fairgrounds and Del Mar Thoroughbred Club “where the surf meets the turf.” A colorful history filled with excitement, pleasure and even a song was created by Bing Crosby and friends such as Jimmy Durante who turned the Del Mar Thoroughbred Club into one of the most beautiful and prestigious organizations in the United States, if not the entire racing world. 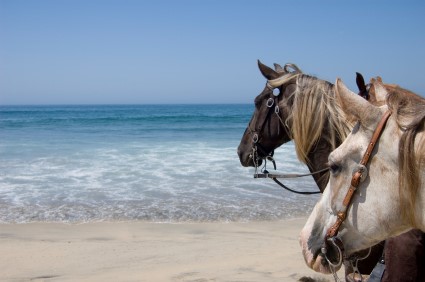 Two beautiful beaches, the famous Torrey Pines State Reserve, sunny weather, an annual fair and the famous Del Mar Racetrack attract visitors who come to enjoy sports and recreation near the ocean. Located in San Diego County 20 miles north of the City of San Diego, Del Mar is bordered on the south by Torrey Pines State Reserve, on the north by the San Dieguito River, Del Mar Racetrack and San Diego County Fairgrounds, and on the west by the Pacific Ocean. East of Del Mar is the I-5 freeway and a new community, Carmel Valley.For fans of Carmel-by-the-Sea on the central California coast, this is the warmer, southern version. Art galleries, fantastic ocean views and winding streets supply a feel of an upscale community with character and charm. Seagrove Park, James Scripps Bluffs Preserve, Torrey Pines State Reserve and Beach and nearby Torrey Pines Public Golf Course provide some fantastic outdoor activities and opportunities to enjoy Pacific Ocean views Del Mar is known for.Del Mar was named in the late 1800’s by Ella Loop. She and husband, Theodore, owned a tent city by the beach which was also called Del Mar, Spanish for “by the sea”. Theodore, worked as a contractor and engineer for the California Southern Railroad which arrived in Del Mar in 1882.

Theodore Loop next formed a partnership with Jacob Taylor to sell 50 x 140 foot lots. Their marketing created some traffic and interest which helped launch South Coast Land Company’s resort with the centerpiece Stratford Inn. Receiving electricity from San Diego Gas and Electric in the late 1920s, residential areas began taking shape and the area experienced its boom. In 1959 Del Mar residents decided to incorporate as a city with a five-member City Council rather than become part of the City of San Diego.